The Slava is the family’s annual ceremony and veneration of their patron saint, a social event in which the family is together at the house of the patriarch. The Slava also brings friends to the house, regardless if they have the same Slava. The family saint is inherited from the patriarch (head of the household) – from father to son, while women do inherit the patron saint of their husbands upon leaving their families. As several patron saints are venerated twice a year, the main day is the Slava, while the secondary one is called preslava. Some families may celebrate another patron saint in the case when the wife is the only left of her kin, in respect to her family. In cases where the daughter’s husband has joined (traditional) household of the parents-in-law (“prizet“/”domazet” = “by-son-in-law”/”son-in-law-in-the-home”), the wife’s father’s slava is celebrated as the main one (when guests are expected and/or invited) and the son-in-law’s only as an additional lesser one (when just a festive meal is prepared for the family and no manual work is carried out, but no guests are expected).

The tradition is an important ethnic marker of Serb identity.[1] Serbs usually regard the Slava as their most significant and most solemn feast day.[2] The tradition is also very well preserved among the Serb worldwide.[3] Apart from Serbs, the custom is also practised by some Orthodox Macedonian families.[4]

The tradition has its origin in the Medieval Serbia, connected to Saint Sava, the first Archbishop of the Serbs. There are indications that the institution of the slava dates from Saint Sava, that “in his understanding and tactful approach to Serbian folk religion”, he “seems to have found a compromise formula satisfactory to both his people’s tradition and the requirements of Byzantine theology”.[5] The slava is a reinterpretation of a pagan rite:[6] the ancestor-protector became a Christian saint,[7] frequently St. Nicholas,[6] with the pagan rite being reduced of many religious elements and frequent ceremonies and becoming a social event with the annual meeting of the family and friends.[7][8] 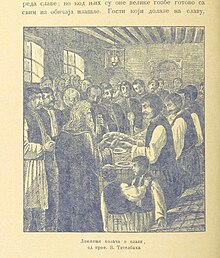 The ritual foods that are prepared for the feast are the slavski kolač (or simply kolač) = a ritual bread, and koljivo (or žito), a dish of minced boiled wheat, sweetened and sometimes mixed with chopped walnuts. The top of the kolač is adorned with the Christian cross, the peace dove, and other symbols. The koljivo is a symbol of the Resurrection of Christ (cf. “if the grain does not die…” in the Gospel) and partaken in memory of the dead (deceased family members).

Depending on whether the celebration falls in a period of fasting, the rest of the feast consists of a meal with a variety of food that is either all animal-except-fish/seafood-free (posno, and that includes sweets also obligatorily made without eggs and dairy) or with dairy, eggs, and the meat of mammals (usually including roast piglet, lamb) and poultry allowed (mrsno); thus, colloquially, slavas can be referred to as posna or mrsna.